There is an old blog post that’s still the most popular post every single week: So you want to compare educational systems from different countries? Where to start?

This new UNESO-report is a great addition to the list on this blog post. I share here the 7 report-cards (which show we still have a long way to go…) 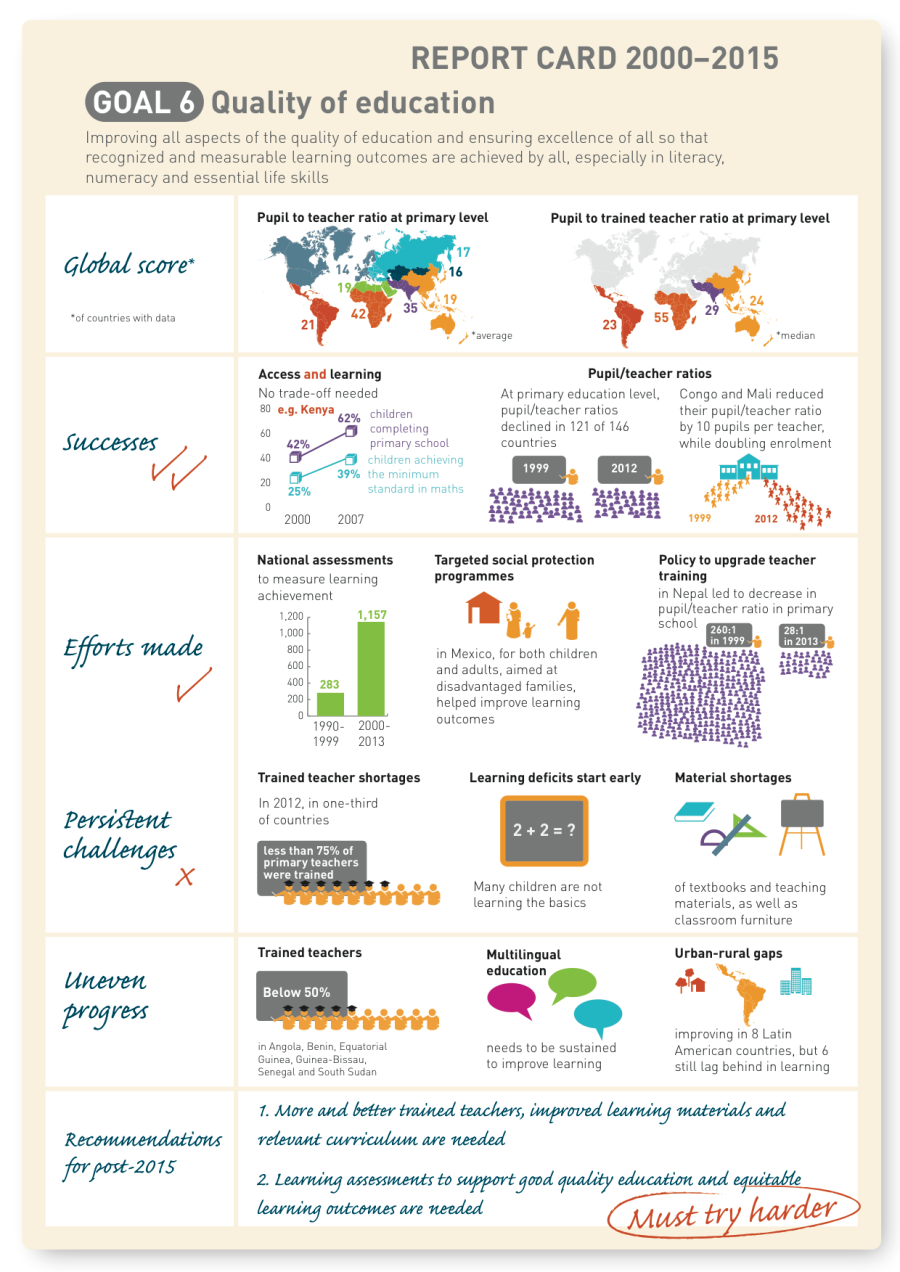 Goal 1. Expand early childhood care and education, especially for the most vulnerable children.

Forty seven percent of countries reached the goal and another eight percent were close. Twenty percent were very far from the goal. Yet, in 2012, nearly two-thirds more children were enrolled in early childhood education than in 1999.

Fifty-two percent of countries achieved this goal; ten percent are close and the remaining thirty-eight percent are far or very far from achieving it. This leaves almost 100 million children not completing primary education in 2015. A lack of focus on the marginalized has left the poorest five times less likely to complete a full cycle of primary education than the richest and over a third of out of school children living in conflict affected zones.

There have been important successes: Around 50 million more children are enrolled in school now than were in 1999. Education is still not free in many places, but cash transfer and school feeding programmes have had a positive impact on school enrolment for the poor.

Goal 3. Ensure equal access to learning and life skills for youth and adults.

Goal 4. Achieving a 50 per cent reduction in levels of adult illiteracy by 2015.

Only 25% of countries reached this goal; 32% remain very far from it. While globally the percentage of illiterate adults fell from 18% in 2000 to 14% in 2015, this progress is almost entirely attributed to more educated young people reaching adulthood. Women continue to make up almost two-thirds of the illiterate adult population. Half of sub-Saharan African women do not have basic literacy skills.

Gender parity will be achieved at the primary level in 69% of countries by 2015. At secondary level, only 48% of countries will reach the goal. Child marriage and early pregnancy continue to hinder girls’ progress in education as does the need for teacher training in gender sensitive approaches and curriculum reform.

Goal 6. Improve the quality of education and ensure measurable learning outcomes for all

The numbers of pupils per teacher decreased in 121 of 146 countries between 1990 and 2012 at the primary level, but 4 million more teachers are still needed to get all children into school. Trained teachers remain in short supply in one third of countries; in several sub-Saharan African countries, less than 50 percent are trained. However, education quality has received increased attention since 2000; the number of countries carrying out national learning assessments has doubled.