I shared this updated list of the effect sizes of 250+ influences on student achievement already on my Dutch blog, but I think many readers of this blog will appreciate me sharing them here too. Some of the effect sizes became less enormous since the 2017 update, e.g. collective teacher efficacy and Teacher estimates of achievement. I do want to give some advice when looking at this new overview.  Hattie’s work has received more and more criticism, something we discuss in our new book on Urban Myths.

The most important mistake one can make, is to focus only on the statistic of the sole effect size. The complexity behind that sole number is much more relevant.

It’s a good thing that Hattie left the ranking behind him, because sometimes low-hanging fruit is as important if it doesn’t cost too much effort. I did notice one confusing mistake in the chart, concerning Teacher estimates of achievement which received a dark blue dot. This would mean “Potential to considerably accelerate student achievement”, but Hattie himself explained earlier on that the high score for this influence was because there was a high correlation and not because working on this influence yielded a better result. 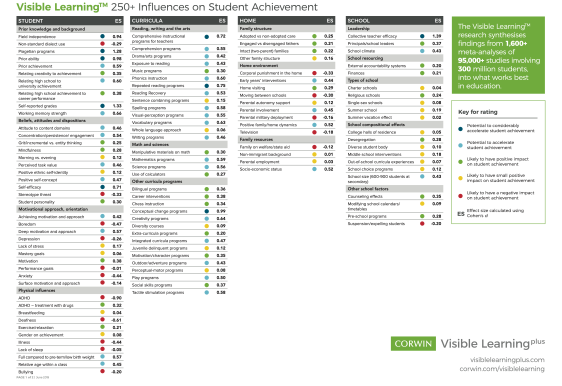 3 thoughts on “The update list of effect sizes by John Hattie, but…”